If it’s one thing that Wicca and witchcraft have a lot of, it’s symbols.  If you’re new to Wicca, some of the beliefs may sound a little bizarre or outright silly.  This section will hopefully help you understand some of the symbolism behind our belief system.

In his book Encyclopedia of Wicca & Witchcraft, Raven Grimassi described the God & Goddess as “the divine totality personified into masculine and feminine aspects…”

The history behind the God & Goddess archetypes is a subject that would fill an entire book.  But here are the basics: in the Wiccan tradition, the God is associated with the sun (many cultures, especially the Ancient Egyptians, had sun gods) and the Goddess is associated with the moon.  The God is often represented with horns (originally with stag-horns, though it evolved later to goat horns).

“Oh, no!  Their ‘God’ is the Devil! Because horns!” said every ill-informed Christian, ever.  The fact is, however, that the Christian church derived their “picture” of the Devil from ancient pagan representations of their god (who had horns, as he was the “Lord of the Animals”).  There is absolutely NOTHING in the Christian Bible that describes the so-called “Prince of Darkness” as a horned being.  The Christian church, wishing to “demonize” pagan belief systems, simply got together one day and decided that the best way to scare people away from pagan faiths would be to overlay a depiction of the pagan gods atop a title that says “Satan.”  Don’t believe me?  Check the Google.  Call a Christian and ask them to point to the Bible verse that says that their Devil looks like the Horned God of pagan times.  Won’t happen; it’s not there.

The symbol below is the one that is most commonly used today to refer to the Horned God of Wicca: 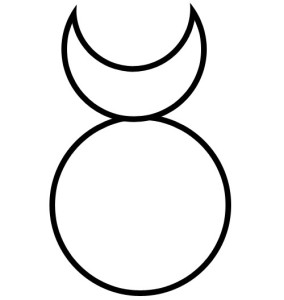 A circle atop which is a crescent-shaped object representing horns. This is the most common symbol of the Horned God.

So anyway, back to the Wiccan symbolism.  The Goddess is often shown in a maternal nature, as she is the aspect of the Universe that brings forth life.  In many, many Wiccan traditions, the Goddess is given more consideration during rituals and is referred to more often overall.  Although the God & Goddess are regarded as equally important, the Goddess is definitely more prominent when you look at Wiccan practices and rituals.

The term “Triple Goddess” is a common term you may hear both in Wicca as well as other Goddess-centric pagan belief systems.  The triple aspect of the Goddess is most commonly shown as the Maiden, the Mother, and the Crone.  This can be associated with the waxing moon, the full moon, and the waning moon, respectively.  Both of these associations are closely linked with the cycle of life (for more information on the cycle of life, or the Wheel of the Year, check out my Wiccan Sabbats section).  The symbol below is the most common symbol in witchcraft with respect to the triple aspect of the Goddess: 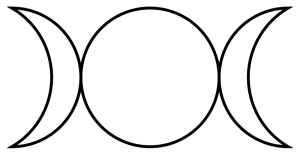 The Triple Goddess (or triple moon) representing the waxing, full, and waning phases of the moon. 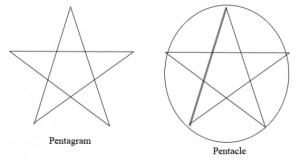 The pentacle is the one symbol that is associated most closely with witchcraft.  And, as with most symbols that are related to pagan belief systems, it’s one that has been touted as having demonic association.  Like the history of the God & Goddess symbols/archetypes, the pentagram has a long and diverse history to it.  The pentagram has been found in ancient dwellings and its use has predated Christianity.  Not until the 20th century did the pentagram (usually with the top of the star pointed downwards) become associated with Satanism.

But, like so many of our cool symbols and figures, Christianity tainted it with murmurs of the inverted pentagram being “demonic” (the inverted pentagram could, arguably, look like a goat’s head; since the Horned God is shown throughout history as a goad-headed being, the Christian church loudly cried “Devil!”).

In reality, the points of the pentagram stand for the four elements: earth, air, fire, water – with the fifth point representing spirit, the unifying force of all the elements.  If you totally nerd out and research the history of the pentagram, you’ll find that it was used in a variety of cultures during many different time periods.

I’ll spare you the geeky details about the golden ratio and the use of the pentagram in different aspects of history.  But hit up the Google if you want to learn more.  It really is rather fascinating for those who find stuff like that fascinating.

The triquetra is a symbol that has Celtic origins.  It is the amalgamation of three interlocked vesica pisces (aka ichthys) that together form a so-called “never-ending symbol”.  Its use predates Christianity, but you’ll never guess what happened?  The Christians took the triquetra (aka the “trinity knot”) and alleged that it was a symbol of the trinity of their God (being a tripartite being as Father, Son, and Holy Spirit).  In reality, the Celtic origin suggests that it was representative of the triple aspect of the Goddess (see above regarding the Goddess symbol). 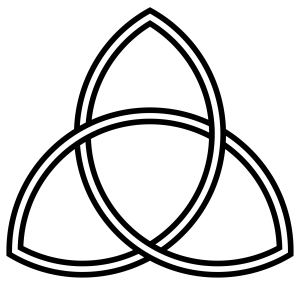 The triquetra, also known as the “trinity knot”, has ancient Celtic origins and predates Christianity.

The triquetra isn’t as popular a symbol in Wicca and witchcraft as is the pentacle, but it was thrust into the witchy spotlight after the TV series “Charmed” began to air, which featured the triquetra on their Book of Shadows.  I guess the producers thought that a pentacle would cause too many viewers to sneer at the “Satanic” symbol.  So although the triquetra is one of the lesser-used symbols in Wicca, it has, nonetheless, become ubiquitous with the younger generation of witches.

There are other symbols that have been used in the Wiccan belief system and in witchcraft in general.  However, these are the most common ones you’ll encounter.  Future articles will dig into some of the less common symbols.

Toggle the Widgetbar
7ads6x98y
What message does the Universe have for you?  Book a reading today to find out!
BOOK TAROT READING

Signup with WiccanUniverse.com today and receive a copy of "A Visit from the Divine" ritual for FREE!